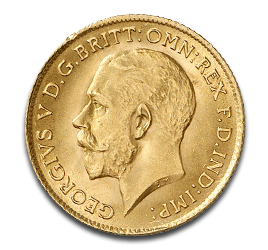 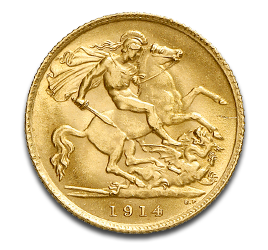 The Sovereign gold coins editions from 1911 to 1932 are dedicated to King George V. These coins were minted in high numbers, and as a result, the Full Sovereigns George V are considered investment coins.

Because of the rich history of Sovereign Gold coins, editions like George V are also popular with collectors. George V was the last Sovereign circulation coin, which makes it appealing to investors and collectors.

The fine weight of the Sovereign George V is 7.322g with a fineness of 917/1000. The alloy used for this classic 22 karat coin was copper. Copper is a hard metal which is why it is sometimes used to mint Gold coins.

Sovereign Gold Coins with a 22k alloy have a golden reddish appearance and can slightly change color over time. This is due to the corrosion of copper. Another famous gold coin, also produced in 22 karats is the South African Krugerrand.

Sovereign George V. Gold coins have a rippled edge and an edge bar. The front shows the profile of King George V, with his face pointing to the left. The inscription is located around the outer edge and reads "GEORGIVS V D.G.BRITT: OMN.REX F.D.IND: IMP:"

The back shows Saint George (about 3rd century AD) slaying a dragon. St. George can be seen on a rearing horse, with a waving cloak, corinthian helmet and sword in his hand. Below the horse is a winged dragon, with its mouth open. The year of mintage, which is important for collectors, can be seen towards the outer edge below the motif.

George V is the second son of Edward VII of Great Britain. George V was the cousin of the German Emperor Wilhelm II, as well as the Russian tsar Nicholas II.

George the V was crowned after the death of his father on June 22nd 1911 in the Westminster Abbey in London. The King of the United Kingdom and Ireland died on 20 January 1936.

The gold Sovereign George V is exempt from VAT, since it fulfills the following criteria for investment gold. The taxation of investment gold in Germany is governed by paragraph § 25c of the German VAT Act.

+ It must be or have been official payment means in the country of manufacture.

+ The gold coin must not exceed the open market price by more than 80%.