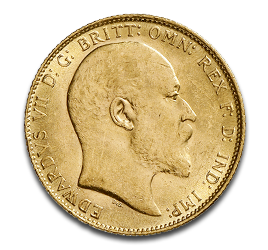 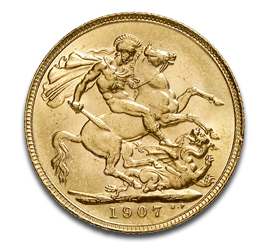 The full Sovereign Edward VII gold coin was minted in the reign years of King Edward VII from 1902 to 1910. The so-called "full” Sovereign has a fine weight of 7.322 g with a nominal value of 1 Pound.

Like all Sovereigns, the Edward VII contains 7.322g of pure gold with a fineness of 916 2/3/1000. This fineness translates to a gold content of 91.66% gold and 8.34% copper. This so-called 22 carat alloy was introduced with the new Sovereign series in 1817. The 22k gold coins have a better scratch resistance due to the copper content and thus are more suitable as circulation coins.

The main copper properties are that it is harder than gold, has a reddish coloring and corrodes.

The Sovereign Edward VII has a rippled edge and an edge bar. The edge bar improves the stability, the stackability and the motifs are protected.

The Avers shows Edward VII King of the United Kingdom, Great Britain, Ireland and Emperor of India. Illustrated is Edward VII in profile looking to the right.

On the reverse St. George the dragon slayer is depicted. The depiction shows St. George with a waving cloak, corinthian helmet and sword, on a rearing horse in battle with the dragon.

This motif is one of the most popular on Sovereign gold coins. Below the motif is the year of mintage and directly above it, usually difficult to recognize, the mint mark.

The table shows the official embassy offices of the United Kingdom, in which the Sovereign was coined. Sovereign without Mintmark were coined in London.