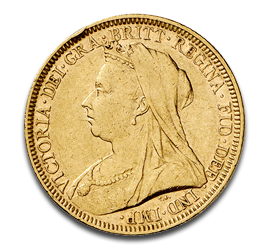 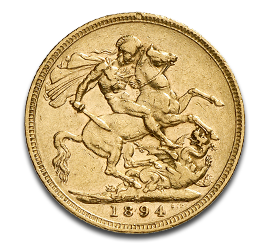 The Sovereign Victoria “Old Head” gold coin celebrates the the final years of Queen Victoria’s reign. The Victorian era is recognized as one of the most prosperous periods in the history of the British Empire.

The Sovereign Victoria “Old Head” gold coin was minted between 1893-1901 and is the last of three portraits that was used on Sovereign gold coins during her reign.

The front side of the coin depicts an elderly portrait of Queen Victoria. The portrait shows the Queen with a head dress and diadem. The inscriptions around the outer edge read “VICTORIA DEI GRA BRITT REGINA FID DEF IND IMP”. The words are in Latin and translate “Victoria By the Grace of God, Queen of Britain, Defender of the Faith, Empress of India”.

The reverse side shows the famous image of St. George on horseback slaying the dragon. This rendition of St. George and the dragon has been used on Sovereign gold coins since 1817. The date of issue is below the motif.