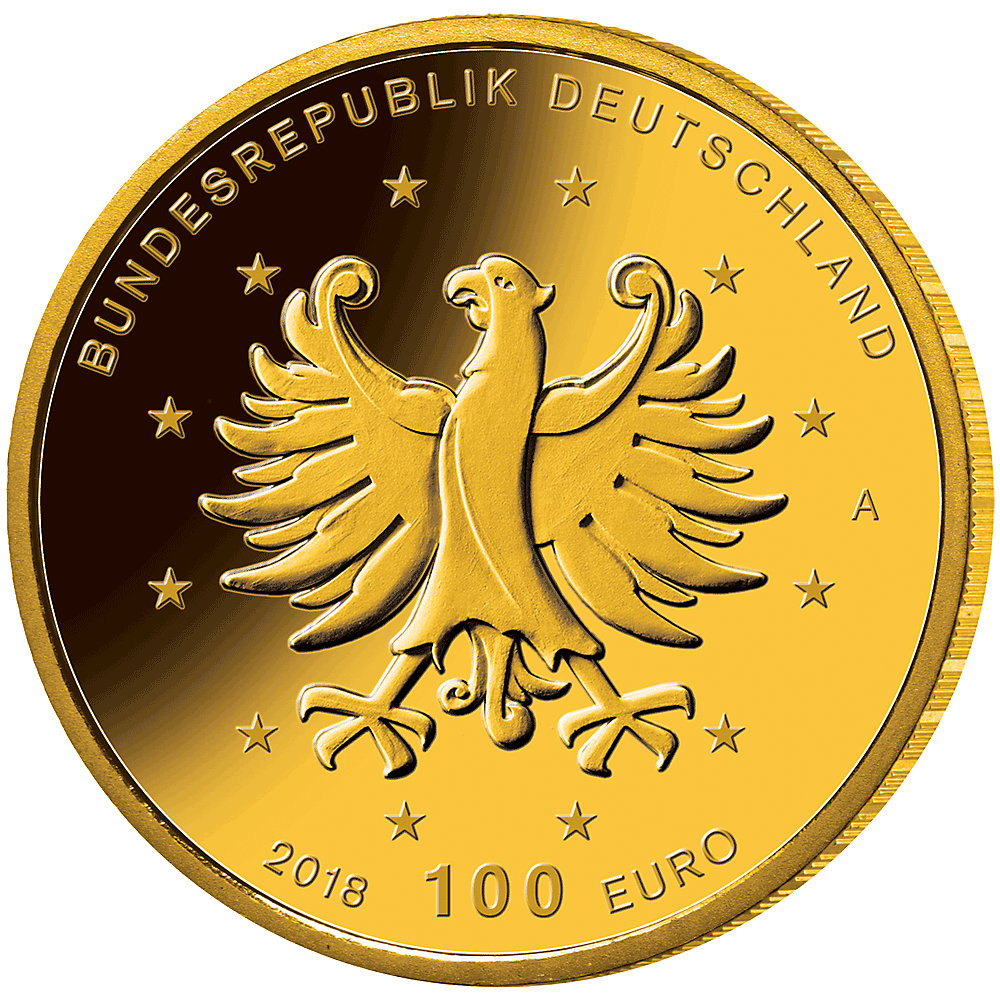 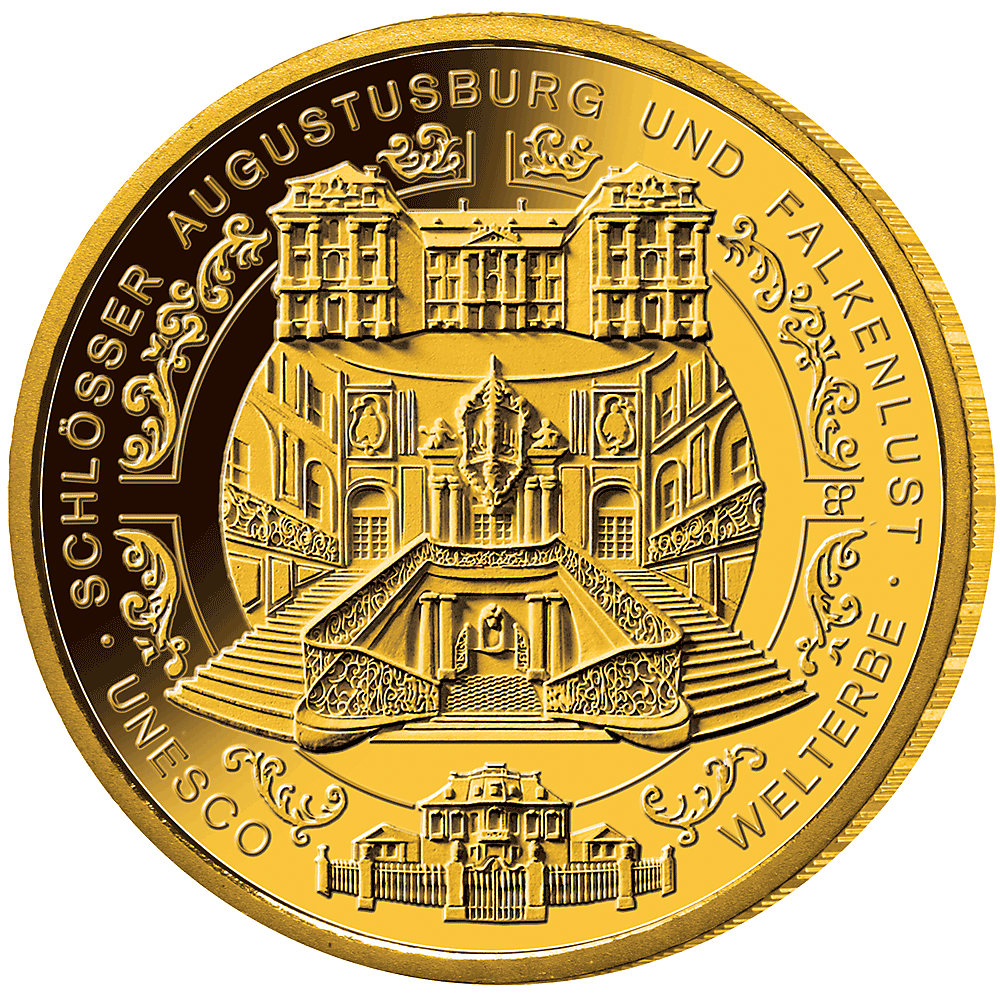 On the 1st of October 2018 the new issue of the 100 Euro Augustusburg and Falkenlust in Bruehl ½ oz gold coin will be issued. The motif shows the castles Augustusburg and Falkenlust in Brühl, which were declared UNESCO World Heritage Sites in 1984. It is the fifteenth issue of the Federal Republic of Germany 100 Euro gold coin with the motif of a German UNESCO World Heritage Site.

The 100 Euro Augustusburg and Falkenlust in Brühl gold coin is produced with a fineness of 999.9/1000, and a fine weight of ½ oz, which corresponds exactly to 15.55 g of fine gold. The issue has a limited circulation number and is produced in equal parts in the five German mints Berlin (A), Munich (D), Stuttgart (F), Karlsruhe (G) and Hamburg (J).

The motif page shows the castles Augustusburg and Falkenlust in Brühl in the Rhineland. The motif is surrounded by ornaments that suggest the time period of the Baroque and Rococo. In the upper part of the motif is the western view of the castle Augustusburg. In the lower area you can see the Jagdschloss Falkenlust. In the middle of the motif, the staircase is shown within the high, wide hall with the stairways and platforms. The staircase is considered the most outstanding achievement of the Baroque.

On the edge is the inscription "Schlösser Augustusburg and Falkenlust" The image of the hunting lodge is surrounded by the words "Unesco" on the left and "World Heritage" on the right.

The value page shows the eagle, which is the coat of arms of the Federal Republic of Germany. The federal eagle is framed by twelve stars. The stars are a symbol of the European Union. On the bottom center is the year of issue "2018" and the face value of "100 Euro". At the right edge, in the middle of the wing of the eagle, is the embossing mark of the issuing mint. The words "FEDERAL REPUBLIC OF GERMANY" surround the upper half of the motif.

Since its introduction in 2002, sixteen "100 Euro gold coins" have been issued. Since 2003, the "100 Euro gold coins" are depicted with with annually changing motifs. German Unesco World Heritage Sites are shown, with the exception of 2002 and 2005. In 2005, a motif in connection with Fußball- ein Stadion- was chosen on the occasion of the 2006 FIFA World Cup in Germany.

The motif of the "100 Euro Gold coin 2018" shows the castles Augustusburg and Falkenlust in Brühl and belong to the German Baroque and Rococo buildings. Since 1984 they have been UNESCO world heritage sites.

The two castles forming the design are located in the east of the city of Brühl. Brühl, is a small, rather unknown city in the Rhineland.

In the 12th century, a water castle was built on the site of the castle Augustusburg by the Archbishop of Cologne Siegfried. The castle was expanded and later destroyed in 1689 by the French in the Palatine War of Succession. The archbishop of Cologne, Clemens August I of Bavaria (1700-1761) had the castle Augustusburg built on the site of the ruins according to the plans of the Westphalian architect Johann Conrad Schlaun.

The foundation was built over the old fortress and as a result, the window axes of the side wings are not completely divided symmetrically. This is very unusual for the time, since symmetry during the Baroque was one of the most important means of expression. The east-facing end of the north and south wing are among the most important works of the German Baroque.

Around 1730, the façades and the flagship rooms were designed in the style of early rooko. At the same time, the buildings in the westside were constructed with the galleries. One of the main creations of German Baroque is the staircase. The staircases and landings lie within a high wide hall.

The entire design of the castle is an expression of the famous house of Wittelsbach.

The castle Augustusburg was planned as a hunting and summer castle and inhabited for only four to six weeks of the year.

Towards the end of the Second World War, the castle was badly damaged. In 1946 construction began to restore the castle. Falkenlust also needed extensive restoration work after the war.

From 1949 to 1996, the Augustusburg castle was used by the Federal President to host state guests. At the time, the title read: "A republic rolls out the carpet - State receptions at Schloss Augustusburg 1949-1996".

Since the 2001 season, the administration of the Brühler began special sightseeing and theme tours for the public. Castle Augustusburg, the castle church and the park are also venues of the Brühler Schlosskonzerte.

The Falkenlust hunting lodge, directly next to the castle Augustusburg, was built from 1729 to 1740 for the then very popular falconry. In the southern part of the hunting lodge the stairs are decorated with Dutch tiles. The ceiling shows scenes of the falconry and was painted by Laurenz de La Roque The courtyard of the castle is open to the avenue towards Augustusburg. The hunting lodge, like its prototype on the roof of the main building, has an observation deck to watch hawk-hunting.

From 1832-1960 the castle belonged to the Brühler entrepreneurial family Giesler. After that, it became the property of the state of North Rhine-Westphalia.