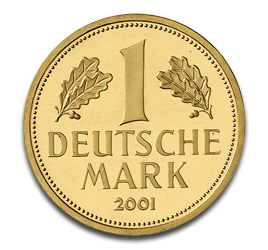 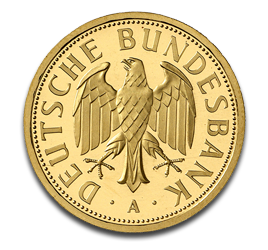 In 2001 the "1-DM" coin was re-minted in pure gold. As a farewell to the Deutschmark and introduction of the Euro, the Deutsche Bundesbank had the Goldmark minted in a limited edition of 1 million gold coins.

This commemorative coin from Germany is suitable for investors or collectors.

The Goldmark has a fine weight of 12g and a fineness of 999.9/1000. The nominal value is 1 Deutsche Mark. Due to the high fine content, the coin is very scratch-sensitive and should be kept in the original protective plastic capsule.

The Goldmark coin has an edge bar and an ornamental circle that surrounds the outer edge of both sides of the coin. The front shows the representation of the normal 1 DM coin. The main motif depicts the image of the number "1" between two oak leaves. Below the motif the inscription "DEUTSCHE MARK" as well as the year of mintage "2001" can be seen.

The back shows the Federal Eagle as a the primary motif. The mint mark is directly underneath the Eagle. The words "DEUTSCHE BUNDESBANK" are stamped around the ornamental circle.

The main difference between the normal 1-DM coin and the 2001 Goldmark is the wording. The inscription on the former 1 DM coin reads "BUNDESREPUBLIK DEUTSCHLAND" which translates to Federal Republik of Germany. Whereas the new 1 Goldmark coin reads “DEUTSCHE MARK”.

With the introduction of the Euro in 2002 and the passing of the Deutschmark, the German Bundesbank requested that a new commemorative Gold Deutschmark coin be issued to celebrate this historic event.

As a result, Ernst Welteke, the former President of the Deutsche Bundesbank led the effort to introduce the new 1 Goldmark coin.

In order to mint the 1 DM Goldmark coin a special law had to be passed. Once the law was passed in 2001, the commemorative Goldmark coins were minted. A total of 1 million pieces were minted by 5 different mints. Each mint produced 200,000 pieces. The five German mints included: Berlin, Stuttgart, Munich, Karlsruhe and Hamburg.

Issue price: 250 DM or 127.83 Euro
This is a preview of the recently viewed products by the user.
Once the user has seen at least one product this snippet will be visible.