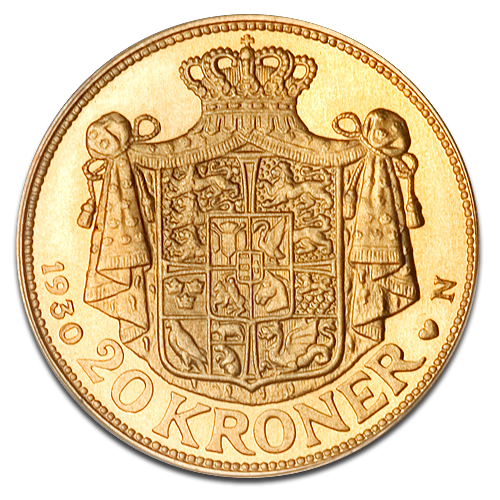 Danish 20 Kroner Gold Coins have a fine weight of 8.06 grams and a fineness of 900/1000. They consist of a gold copper alloy in the proportions 90% gold and 10% copper. The copper content provides good scratch resistance, since copper is a harder metal.

The 20 Kroner Christian X has a reddish (golden red) color, which is caused by the natural color of copper. The color of the coin changes over time to a darker red due to the corrosion of copper. The coin has edge bar and an ornamental circle.

The reverse depicts the Great Coat of Arms of Denmark. On the bottom of the coin the year of issue and the nominal value of 20 Kroner are embossed.

He became famous outside of Denmark by the resistance against the Nazi occupation of Denmark in 1940. At the time he rode with his horse every day, without escort, through Copenhagen, the Danish Capital

On both sides of the 20 Kroner gold coin the year of mintage is shown, which is very unusual for coins.

There are three different variants of Kroner Gold coins with different Danish kings.