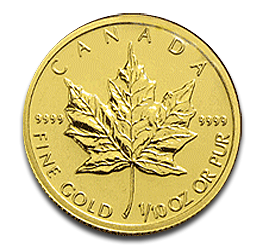 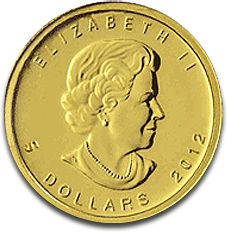 The 1/10 oz Gold Maple Leaf is a popular fractional size coin. Its convenient size is an attractive feature for investors or collectors who are in the market for smaller weight gold coins. The 1/10 oz is the second smallest size in the fractional coin series. Maple Leaf fractional gold coins are popular because they give investors alternatives to the 1 ounce coin. The 1/10 oz is a good choice for first time gold buyers or for those who are looking to incrementally add to an existing gold coin portfolio.

Another advantage of fractional gold coins is the different price points. This provides buyers with added investment flexibility. It should be noted that premiums can be higher on fractional weight coins because they are more expensive to mint. Generally speaking, the smaller the coin, the higher the premium will be. The 1/10 oz Gold Canadian Maple Leaf is considered legal tender in Canada and has a face value of 5 Canadian Dollars.

The Maple Leaf became the national symbol with the introduction of the Canadian flag in 1965. However, the Maple Leaf has been used as a national emblem since the 1700’s. The Maple Leaf chosen is a generic Maple Leaf that represents the 10 species of maple trees native to Canada.

At least one of these species grows in every province. The Maple Leaf is currently on the Canadian flag, and is used on logos of Canadian companies and sports teams, such as the Toronto Maple Leaf hockey team.

Since 1979, the Royal Canadian Mint has produced gold, silver, platinum and palladium bullion coins that are officially known as “Maple Leafs”.