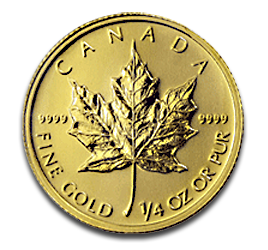 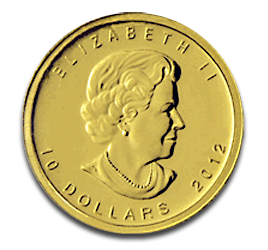 In 1979 the Canadian Mint introduced the Gold Maple Leaf. At the time the Maple Leaf was introduced, the South African Krugerrand was the most popular gold coin in the world. What made the introduction of the Gold Maple Leaf so significant was its high level of purity. The Krugerrand is minted in a 22 karat gold alloy that includes copper. The Maple Leaf was therefore regarded as one of the first 24 karat bullion coins. From 1979-1982 the Maple leaf had a fineness of 999/1000 and then in 1982 the fineness was increased to 999.9/1000. Minting a coin with a high level of purity launched the Gold Maple Leaf onto the world stage. The coin became a popular alternative to the Krugerrand for not only investors but also collectors. The Gold Maple Leaf is one of the highest quality bullion coins minted today. The fractional sizes are available in ½ oz, ¼ oz, 1/10 oz and 1/20 oz.

The Gold Canadian Maple Leaf is produced by the Canadian Mint, which was founded in 1908. The mint has an excellent reputation for producing high quality precious metals products.

Canadian Gold Maple Leafs have good brand name recognition and can be easily bought and sold at precious metals dealers around the world.