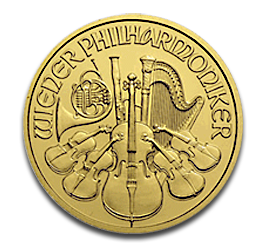 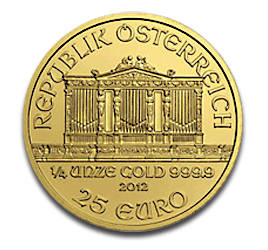 The fractional Gold Vienna Philharmonic series consists of the 1/2 oz, 1/4 oz and 1/10 oz. The key dimensions for the 1/4 oz Gold Philharmonic are listed below:

The design of Vienna Philharmonic Gold coin series was created by Thomas Pesendorfer, the Austrian Mint’s Chief Engraver. The gold coins are known for their high quality and detailed design that portray the rich musical cultural history of Austria. The Austrian Mint produces the Vienna Philharmonic. Some facts that gold investors may find interesting is that in 1919, when the Republic of Austria was formed, the Vienna Principal Mint became the sole mint for Austria. The name of the mint was changed in 1989 when it became a subsidiary of the National Bank of Austria. In 2004, to celebrate the 15 year anniversary of the Philharmonic, the Austrian mint issued a 1000 ounce Gold Philharmonic. Known as “Big Phil”, the mint only produced 15 of the coins. The coins carry a face value of 100,000 Euro’s and weights about 68 pounds. It is the heaviest European gold coin.

Investors can’t go wrong with the Philharmonic. It is one of the best globally recognized coins in the world and is pure gold with a fineness of 999.9/1000. The 1/4 oz Gold Philharmonic offers a more flexible price point for those investors who want an alternative to the 1 oz coin.