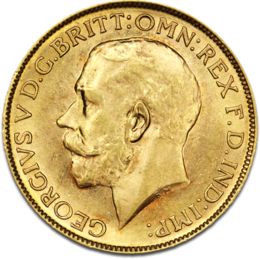 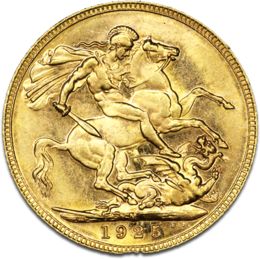 The half Sovereign George V has a fine weight of 3.661g. It was minted during the reign of King George V in the years 1911 to 1936.What makes these coins so unique is that most of the editions were the last Sovereign Gold circulation coins in the U.K. Prior to 1932, the Sovereign was a fully circulating coin within Britain’s Gold Currency Standard.

Some of the George V Half Sovereigns are over 100 years old. These iconic gold coins are popular amongst collectors for their commemorative value, but are also suitable for investors.

Sovereign Gold coins are some of the oldest and most recognizable coins in the world.

Copper is often used in the production of gold coins. Gold is a soft precious metal and therefore can easily scratch. Adding a small amount of copper gives gold coins more durability.

Other famous gold coins that have a Gold-Copper alloy include the South African  Krugerrand and the American Gold Eagle.

Like the full sovereign, the half sovereign has an edge bar and a rippled edge. The edge bar improves stability and stackability while protecting the motif. The rippled edge has an aesthetic function and also serves to prevent counterfeiting.

The front of the Sovereign shows King George V in a profile view to the left. The motif on the reverse side is of St. George (3rd Century) in a battle with a winged dragon. St. George (the Dragon Slayer) is depicted sitting on a horse, with a flowing cloak, corinthian helmet and sword. The year of mintage is depicted below the motif, as well as the mint mark (only visible under magnification).

Full and half Sovereign